Red hot Vancouver traditional rockabilly trio, The Wheelgrinders have been blazing a trail of grinding rockabilly music across the Lower Mainland of BC and beyond since June of 2016 and made their debut on the international rockabilly scene with a tour of the UK in 2018, including an appearance at the world famous Atomic Vintage Festival at Sywell Aerodrome followed by a 31 date tour of the Netherlands and Belgium in 2019.

Comprised of three veterans of the Vancouver rockabilly and roots music scene, Greg Tiernan (Vocals/Lead Guitar) Caroline Helmeczi (Vocals/Bass) and Stuart Quayle (Drums) play their own self-penned highly danceable rockabilly numbers and for the hard core rockabilly fans they put their own spin on classic songs by rockabilly icons like Carl Perkins, Eddie Cochran and Charlie Feathers. The band is a regular on the playlists of rockabilly DJs around the world and have been featured on many shows from Canada and the USA to Australia, Spain, France, the UK and even in Moscow, Russia. Their debut album "Torque-Flite Baby" sold out its first pressing and is now in its second pressing. The Wheelgrinders released their second album "Crank It Hard!" in June 2018. 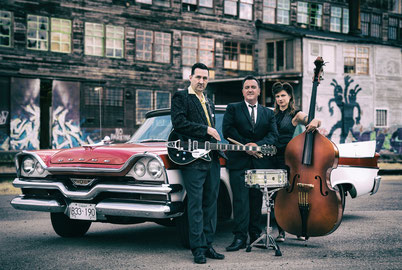 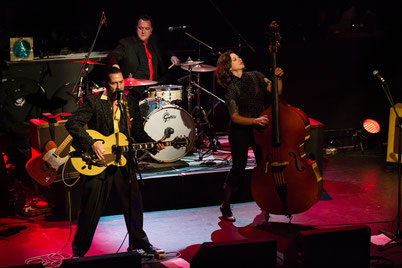